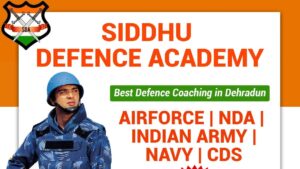 Indian Air Force Group Y Exam ELIGIBILITY CRITERIA:-
Date of Birth Block –
(a) Candidate born between 13 January 1998 and 02 January 2002 (both days inclusive) are eligible to apply.
(b) In case, a candidate clears all the stages of the Selection Procedure, then the upper age limit as on date of enrolment is 21 years.
Educational Qualification –
(a) Group X (Except Education Instructor Trade).
(i) Passed Intermediate/10+2/ Equivalent examination with Mathematics, Physics and English with minimum 50% marks in aggregate and 50% marks in English.
OR
(ii) Passed Three years Diploma Course in Engineering in any stream, as mentioned in the drop down menu of apply online section under candidate’s login on the CASB web portal www.airmenselection.cdac.in. The candidate should have completed the course from a Government recognized Polytechnic institute with 50% marks in aggregate and 50 % marks in English in diploma or in Intermedidate/Marticulation, if English is not subject in Diploma Course.
(b) Group Y {Except Automobile Technician, GTI, IAF (P), IAF(S) and Musician} Trades.
Passed Intermediate / 10+2 / Equivalent Examination in any stream/subjects approved by Central / State Education Boards with minimum 50% marks in aggregate and 50% marks in English.
(c) Group Y Medical Assistant Trade Only.
Passed 10+2/Intermediate/ equivalent exam with Physics, Chemistry, Biology and English with a minimum of 50% marks in aggregate and 50% marks in English.
Note–1: Candidate eligible for Group X examination are also eligible for Group Y and would be given an option of appearing in both group X and Group Y exam in one sitting while filling up the online registration form.
Note – 2: Diploma holders are eligible to appear for Group X trades only.
Note – 3: Education Boards listed in Council of Boards for School Education (COBSE) website as members, as on date of registration will only be permitted.
Note – 4: Exact aggregate Percentage of marks before decimal as written in the marks sheet of 10+2/ Intermediate/Equivalent Examination/Three years Diploma Course OR calculated as per the rules of concerned Education Board/Polytechnic Institute will only be considered (For example 49.99% should be taken as 49% and not to be rounded off to 50%).
Mandatory Medical Standards:-
(a) General Medical Standards for both Group ‘X’ (Except Education Instructor Trade) and Group ‘Y’ {Except Automobile Technician, GTI, IAF (P), IAF(S) and Musician} Trades are as follows: –
(i) Height: Minimum acceptable height is 152.5 cms.
(ii) Chest: Minimum range of expansion: 5 cm
(iii) Weight: Proportionate to height and age. However, minimum weight of 55 Kg required for Operations Assistant (ATS) Trade only.
(iv) Corneal Surgery (PRK/LASIK) is not acceptable. (v) Hearing: Candidate should have normal hearing i.e. able to hear forced whisper from a distance of 6 meters with each ear separately.
(vi) Dental: Should have healthy gums, good set of teeth and minimum 14 dental points.
(vii) Health: Candidate should be free from medical or surgical deformity. He should be free from all communicable diseases and skin ailments. Candidate must be physically and mentally FIT to perform duty in any part of the world, in any climate and terrain.
(viii) Body Tattoo: Permanent body tattoos are not permitted, however tattoos only on inner face of the fore arms (inside of elbow to the wrist), back (dorsal) part of the hand/reverse side of palm and Tribals with tattoos which are as per custom and traditions of their tribes may be considered. However, right to decide on acceptability/ unacceptability of the individual rests with the Selection Centre. Candidates with permanent body tattoos are to submit two photographs (close up and distant view) with details of size and type of the Tattoo.