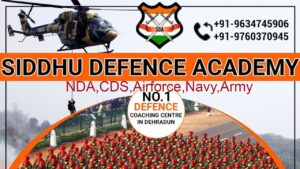 During the Indian independence struggle, Indian leaders recognized the need for a local military institution to meet the needs of an armed force loyal to sovereign India. The British Raj was reluctant to commission Indian officers or to permit local officer training. Until World War I Indians were not eligible for commission as officers in the Indian Army.

Following the experiences in World War I, where Indian soldiers proved their mettle, Montague-Chelmsford Reforms facilitated ten Indians per year to undergo officer training at the Royal Military College, Sandhurst. In 1922 the Prince of Wales Royal Indian Military College (now known as the Rashtriya Indian Military College) was set up in Dehradun to prepare young Indians for admission to Sandhurst. The Indianisation of the Army started with the commissioning of 31 Indian officers. Among this first batch of officers to be commissioned was Field Marshal Sam Hormusji Framji Jamshedji Manekshaw, who later became the Chief of Army Staff of the Indian Army and the first Indian Field Marshal.

Despite demands, the British resisted expansion of the Indian officer cadre. Indian leaders then pressed for the issue at the first Round Table Conference in 1930. Eventually, the establishment of an Indian officer training college was one of the few concessions made at the conference. The Indian Military College Committee, set up under the chairmanship of Field Marshal Sir Philip Chetwode, recommended in 1931 the establishment of an Indian Military Academy in Dehradun to produce forty commissioned officers twice a year following two and a half years of training.